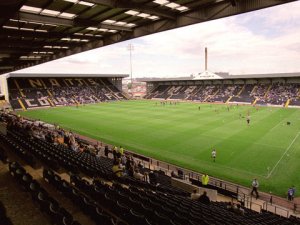 Going behind just 20 minutes into a game would knock most teams’ confidence. Not Brentford. After a bright start for the hosts, Tony Craig’s own-goal put them one-nil up and had it not been for in-form goalkeeper, Simon Moore, County could have been easily out of sight before the break.  ‘The Bees’ did not let their heads drop however, and 16 minutes later their pressure was rewarded with a well-worked goal from former Everton midfielder, Adam Forshaw following a delightful pass from the impressive Fulham loanee, Marcello Trotta. After the break, the match was played from end-to-end with Brentford looking the more likely to score but with no goals to show for their trouble. Douglas went close for the West London side with a free-kick whilst at the other end, Moore did well to hold onto a Francois Zoko header. The match looked as though it was heading for a 1-1 draw, a popular scoreline in the last few meetings of the two teams, until Forshaw saw his shot deflected into the path of striker Clayton Donaldson who scrambled his shot home to give the visitors a precious three-points in their hunt for automatic promotion.

All I can say is wow. Brentford are absolutely flying at the moment and they are showing no signs of slowing to let their rivals catch them. The hunger and desire amongst the young players is something many Brentford fans cannot say they have witnessed because in many fans’ opinions, this is the best ‘Bees’ team for a generation. And the reason? Confidence. On the pitch, the players look composed and look as though they have the belief that they are good enough; something previous squads have been lacking in. It seems as though Uwe Rosler believes in them too; although he may shout and holler at a player, a mistake does not mean the end of their run in the first-team. Take Paul Hayes for example, he went 12 games before scoring his first goal and I recall ‘fans’ started getting on his back versus Coventry. Uwe persisted with him though and the next game, he rewarded the faith with a brace. Patience is a virtue.

In my 10 years as a Brentford supporter, I have experienced some amazing highs (winning League Two in 2008/09, Wojciech Szczesny signing on loan, getting to Wembley in 2010/11) and some terrible lows (relegation in 2006/07, losing at Wembley in 2010/11, Andy Scott’s last game in-charge) but absolutely none of those things can beat what Uwe Rosler is pulling off at Griffin Park this season. I might be slightly but I think that it is an absolute travesty that he wasn’t awarded the Manager of the Month award this month. Brentford haven’t lost in League One since 20th October versus Doncaster and even then, they fell behind with just 5 minutes to go. Maybe next month? Brentford fans want to watch the simple passing game the former Man City striker has employed and even ex-Pro turned pundit,  Mark Bright encouraged his Twitter followers to ‘[go and see] one of the best footballing teams I’ve seen this season…#Brentfordfc’.

A win against Stevenage on 22nd December could see Brentford climb to the top of the table for the first time this season and in the rich vein of form that they are in, Moore, Donaldson, Forrester and co. could cement their place in the top 4 a lot sooner than anybody expected…