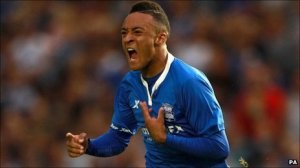 Thursday 26th August 2010 is a day that will go down in football history. This was the day that the world was introduced to one of English football’s brightest prospects: Nathan Redmond.

Coming onto the field as a 78th minute substitute for Enric Vallès, Redmond became Birmingham City’s second-youngest player against Rochdale in the League Cup aged 16 years and 173 days. As if he had nothing to already prove, the young winger impressed on his debut; his twelve-minute cameo was described as ‘electric’ by City chief Alex McLeish who went on to claim he has ‘bright future’.

The Blues ran out 3-2 winners that night but Redmond was to only feature twice more before the end of the campaign which saw the West Midlands side slip into the second-tier of English football for the second time in four seasons.

Born and raised in Birmingham, Redmond was first spotted playing for local side Hardy Spicer as an 8 year old where City scouts watched him and signed him for their under-10 team, for whom he subsequently scored a hat-trick on his debut. A rapid rise through the ranks saw him feature for the U18’s aged just 15 and for the reserves with some eye-catching performances which caught the eye of Alex McLeish so much so that he gave Redmond a squad number in 2009/10 and a place on the bench for the final Premier League game of the season which, had he entered the field of play, would have seen him become not just the club’s youngest ever player but the Premier League’s too.

In January 2011, Redmond looked to have gained the opportunity for first team football when he signed for League Two side Burton Albion on a one-month loan deal. Burton manager, Paul Peschisolido described his acquisition as ‘dynamic…and exciting to watch’ whilst Redmond himself spoke of his desire to further his footballing education with the Brewers. However, his Burton career was never to materialise; the Football League refusing to ratify the deal due to a rule which states first year scholars cannot sign on loan for a League club, leaving all parties disappointed.

This disappointment was to last only 2 months, however. Just days after his 17th birthday, Redmond signed a three-year professional contract with his boyhood club. Ending speculation about his immediate future he told reporters ‘I’m delighted. I’ve worked hard to get here but I know that the hard work has got to continue if I want to push myself on further’.

In the summer of 2011, the teenager’s career reached another high with his inclusion John Peacock’s squad for the England U17 World Cup. After being an unused substitute in the opening game against Rwanda, which England won 2-0, Redmond started the next game against Canada and he returned to the fold in the round of 16 game versus Argentina, another game which England won albeit on penalties. He also came onto the field as a late substitute in the final game against Germany where a brave England finally succumbed to defeat. This was to be his final action in an U17 shirt as, along with many of his teammates, he moved up to the U18 squad where he will hope to convince U21 coach Stuart Pearce to give him a chance to test himself against some of the best youngsters around.

It was purely by chance that the youngster’s first-team career took off at the beginning of the 2011/12 season. A preseason friendly appearance against Cork City drew praise from new City manager, Chris Hughton and coupled with injuries to key first team players, Redmond saw himself playing the full 90 minutes in a Europa League match against Nacional, the Blues’ first European match in 50 years. 3 days later, he made his League debut against Middlesbrough and the following week, he scored his first professional goal in the second leg against Nacional. A whirlwind fortnight for Redmond established him as a future star with a much more prominent first team role and at the time of writing, he has amassed a total of 21 appearances and scored 3 goals so far this season, very respectable statistics for any Championship player, let alone one who is 17 years old.

Premier League big guns Manchester City and Liverpool have both declared an interest in signing Redmond, who is valued at around £10 million but with Chris Hughton desperate to nurture his prized asset and has said ‘his best place to continue developing is here’.

With Redmond’s career going from strength to strength every day, the question is whether he is in it for the money or for the experience. Will he want the upheaval of a big-money move or will he take Hughton’s advice? Only time will tell.